When Chad and I were given Whistlin’ Riggin’ we had to pinch ourselves. It was a better opportunity than we knew to even dream for. Time and time again since that day, we find ourselves in awe of the kindness others have shared with us. We believe there is a certain approach towards life and opportunity it takes to make the unthinkable happen so your dreams can come true. We want to share with you some of the mentality that has helped us get to where we are today in hopes that you can apply it and make whatever your dream is come true as well.

Be optimistic about things that seem “too good to be true.”

We found out about Whistlin’ Riggin’ through an Instagram post when I was looking at #boatlife posts, now my new favorite hashtag. I read the caption, commented immediately, and clicked to the business profile that had just delivered the boat and put the post up. I immediately picked up the phone and called. Not enough people take that step these days. 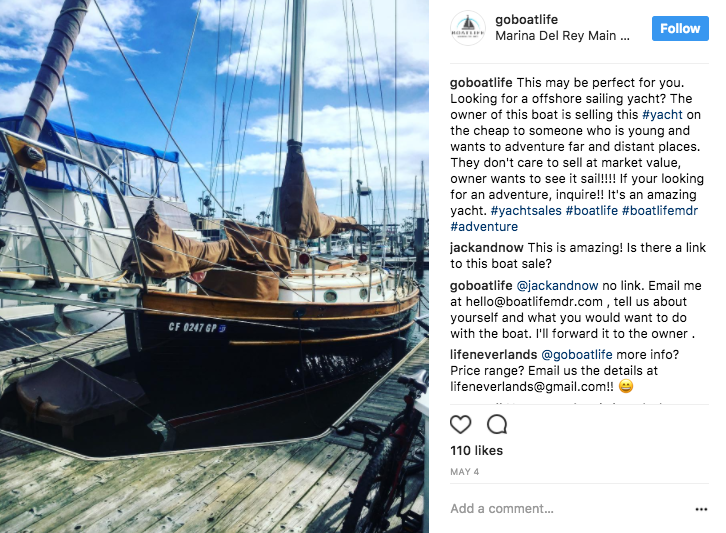 Within ten minutes of seeing the post, next steps were in place. I had just finished speaking with Captain Ash who had delivered Whistlin’ Riggin’ from Marina Del Rey to Newport Beach, California for a client. His client was the one interested in giving this boat at a great price to young adventurers and well, we needed to speak with him! Ash recommended I write an email to share a bit about Chad and I, our dreams and how this just might be a perfect match.

Value relationships that are open, honest and sincere.

This was exactly how we wanted to approach our introduction and I spent the following two hours crafting a nine paragraph email (yes, nine) for Ash to send to the owner of Whistlin’ Riggin’. I am fairly certain I wrote this more carefully than my college thesis. This email led to us getting in direct contact with the owner, who had been entrusted with the sailboat after his dear friend Donna had passed away.

“Ash may have told you I am most interested in finding the right person(s) for her, which was Donna’s wish. It sounds like you and Chad may be those people.”

This was a good start! We spent over an hour with him on the phone the following night discussing even more details.

It quickly became apparent the next thing to do was plan our trip to California to check out this sailboat! A combination of airline points and dollars got us from the East Coast to the West where we  spent three full days in Newport Beach, sleeping aboard Whistlin’ Riggin’ and looking at every aspect of her. We not only learned a lot about Whistlin’ Riggin’s condition but also her history and the story of her lifelong owner, Donna, who single-handed her to and from Catalina Island while in her 80’s. Talk about impressive!

Jump in with both feet first.

Our last day in Newport Beach we sat down for lunch with Whistlin’ Riggin’s owner. It was time for us to make some decisions. This sailboat had some great things going for her, but also some areas that were in need of dire repair work if she was going to be worthy of crossing an ocean ever again. With a handshake and Whistlin’ Riggin’ in sight, the three of us decided we would invest our time and dollars in the restoration of Whistlin’ Riggin’. We would work together to restore her former prowess and as Donna had imagined, take her to adventure far and distant places.

Now it’s time to highlight a second boat, though small in stature, one that is near and dear to our hearts. This custom build was made for Chad when he won a bet at the yacht yard.

“If you can remove this piece of fine teak trim without breaking it apart, I’ll give you another free boat.”

How can you say no to a challenge like that? I’ll tell you how, you can’t. And when we saw Whistlin’ Riggin’ we couldn’t say no either.

Chad was the right man to remove fine teak, and the wrong man to place a bet like that with if you were hoping to win. His attention to detail is nauseating to some and admirable to others. But this is just the kind of attention to detail that we need when dealing with a complicated lady like Whistlin’ Riggin’ who holds secrets of years past under every floor board and inside every compartment. Where would we be if Chad hadn’t noticed the trampolining of our hull? With one rough wave, possibly underwater. And it is Chad’s attention to detail the day of the bet that won him our second free boat.

Surround yourself with experience when you have none.

Our friend Trevor made this bet with Chad and delivered on his promise of a free boat, in what I think we all have to admit was a very creative way. His prior experience as a boatwright also likely helped out in the construction of his five minute masterpiece. We are thankful that he has also taken the time to teach us and share much of what he’s learned from the process of rebuilding his own Hans Christian 38′. For example, when we recently removed all eight of the port lights on Whistlin’ Riggin’ we used the same method Trevor used on his Hans Christian (more on that in another blog). There are several others that, like Trevor, have helped us along in meaningful ways and we know this just the beginning.

Take an interest in interesting things.

Chad arrived at the South Coast Shipyard to continue work on Whistlin’ Riggin’ only to be confronted by a blockade of the side street the shipyard is on thanks to a large mast strewn across it. Even beside a shipyard, this is not an everyday sight. This mast belonged to a 40 ft. sailboat and after observing for a short bit and starting a conversation, Chad discovered the mast was soon destined to be split in half. The couple that owned it was going to bring half the mast from their home on the water to their home in Idaho where it would serve as a flagpole in their front yard. Not a bad idea! Tucking this one away for later.

Splitting a mast for a 40 ft. sailboat in half does not make it much easier to move around, and certainly not a one man, two man, or heck, even three man job. Chad quickly offered to help and did so as they carried the halves of the now severed mast back onto the deck of the sailboat.

Throughout this entire encounter, Chad had taken some time to ask about the owners, their sailing experiences, and their dreams to come. He had also mentioned pieces of our story, including how Whistlin’ Riggin’ became ours, the places we dreamed of sailing, and the individuals we hoped to inspire along the way. Talking about our move from the East Coast to the West Coast, the mention of our waiting-for-a-dinghy outboard motor had come up. We had brought the outboard motor from our dinghy on the East Coast with us but left the dinghy behind and now the motor was sitting on our apartment balcony. Chad shared that we had decided to wait to purchase a dinghy on the West Coast until it would be financially wise for us to do so and didn’t have the funds to do so now. This couple just happened to have multiple spare dinghy’s sitting at their home in Idaho… and both happened to be pilots who flew themselves to and from the area with plans to return the following week. With their kind offer, Chad gave them his contact information eager to see where this would lead.

A week passed and we heard nothing. We also had no way of contacting them ourselves as Chad had only given them his information. Friday, the day they were to return, came and went with no word. Saturday, Chad and I went to work on Whistlin’ Riggin’ as we do most weekends and sitting there on the bow was… a dinghy! No note, no contact information, and now we must just consider them our dinghy angels who came and went in less than a week, leaving us with the most wonderful gift.

Since pairing our outboard motor with the gift from our dinghy angels, we have explored the entirety of Newport Harbor and taken several of our new friends out on it as well. The dinghy as well as its own story has already started to inspire more young sailors and we haven’t even started sailing yet!

We are ever-thankful to those who keep adding to this story and are constantly pinching ourselves that we get to be the vehicle for it. With that in mind, it is time to get back to work so we can get Whistlin’ Riggin’ ready to sail around the world!

[…] last two weeks we shared about how we got two free boats, Whistlin’ Riggin’ in Part I and a quite-smaller-but-still-significant custom build from our friend Trevor in Part II. We […]

0
How We Got Three Free Boats: Part II of III – Life Neverlands

[…] week we shared how we got a 1979 Union Polaris 36′ named Whistlin’ Riggin’ for free in Part I. Now it’s time to highlight a second boat, though small in stature, one that is near and dear […]

Hi, I’m Abby! I was inspired to start Life Neverlands to share all I have learned in pursuit of my dream to sail the world. With a strong interest in the ocean, sailing, and youth education, I have also expanded Life Neverlands to include Neverland Ocean Learning, an ocean education series created to excite youth about the ocean that is currently in development.