Yes ladies and gentlemen, the demolition phase of this refit seems to never end but for all intents and purposes, for good reason.

Now the whole salon has been ripped out and reglassed, I thought it was only proper that we tear out the entire cabin headliner and finish grinding the delaminating fiberglass from the V-berth.

I was originally going to take this week light on the demo and dust and remove all of the port lights. While starting that project, I noticed that the cabin top flexed pretty significantly, guessing about a full inch of flex. I assumed that the coring must be balsa and was either soaking wet or simply rotten resulting in the flex. The only really way of truly knowing was to strip the cabin headliner completely off. Since I was going to have to do this to run wire to all the lights on the cabin top, I thought instead of waiting why not just do it now. Plus, it’s a messy job and I’d rather get the messy job out of the way before we begin rebuilding the interior and completing other installations. 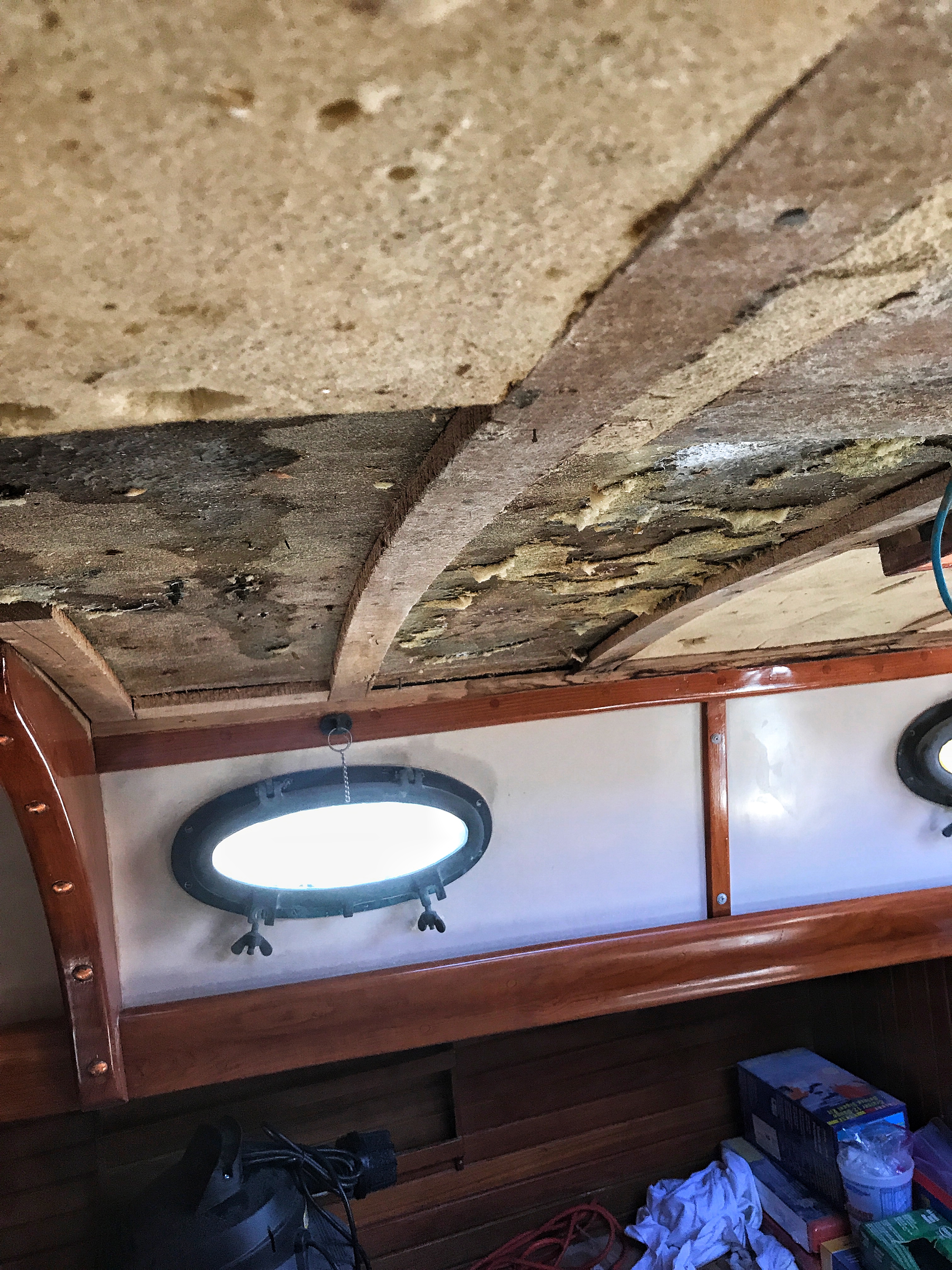 On this boat there are always surprises.

In taking off the cabin top, I found out that majority of the cabin top is solid glass, with the only exception being the foredeck which wasn’t too surprising. What was surprising is that the glass is only a quarter inch thick, and without a coring to act as reinforcement, there is going to be some flex. But for me, an inch is simply too much flex but easily solved by reinforcing it with more fiberglass.

However, the foredeck is cored. I was pretty confident from the start that it would be, but my first guess was again that it would be balsa. After tearing down the cabin headliner I found that it was actually foam instead. After doing some research, to be honest I prefer foam over balsa (wood): it doesn’t rot, is more forgiving, can act as a insulator, and is lighter. Another major benefit is that per square inch balsa is much much stronger, and balsa or any wood for that matter will have a better relationship with fiberglass and epoxy resins over foam any day.

There is more foam in this boat then there is teak!

…and if you know about Taiwanese boats this age, you know that is saying something! Anyways, removing the cabin headliner wasn’t too crazy – just messy. 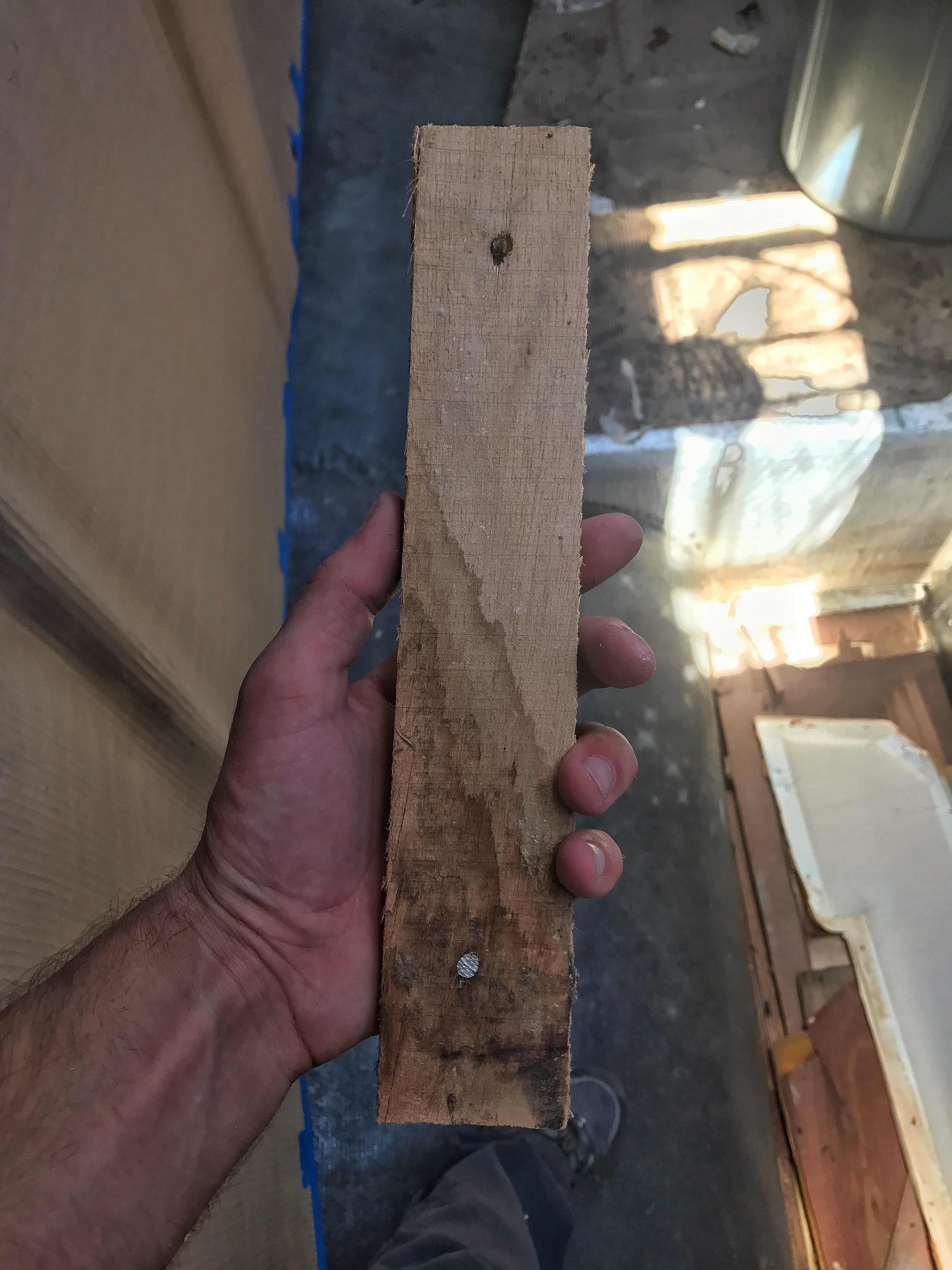 I did find a billion rusty nails that were driven into the deck, and I QUITE LITERALLY MEAN A BILLION. I almost thought about counting all of them to share with you guys, but then I thought twice about it and thought I would sound like a bit of a smart ass and at the expense of who knows how much time it would have taken me to count them all. 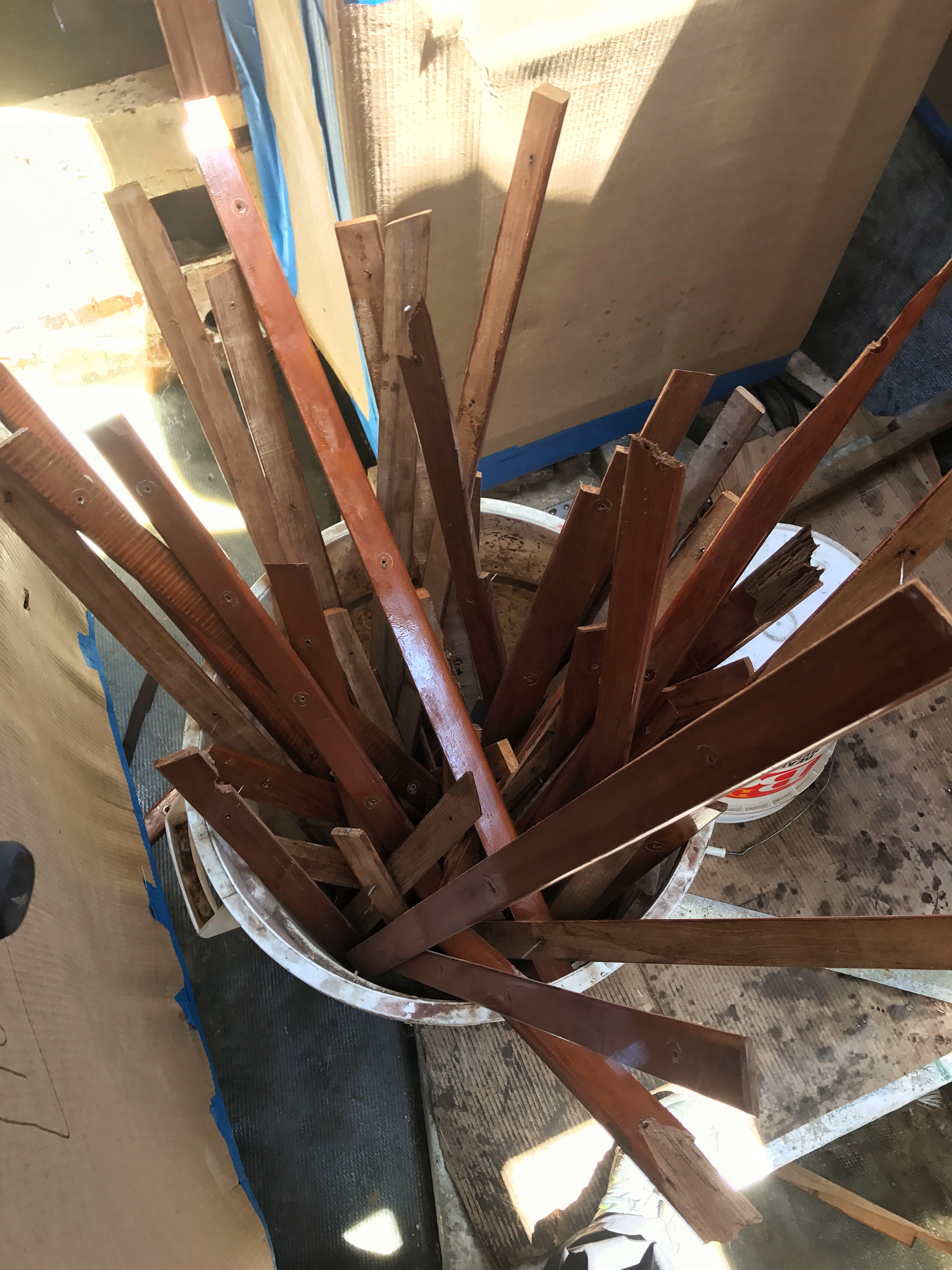 And don’t even get me started on the trim work that went along with the cabin headliner. There was probably twice as many more rusty staples in those bad boys along with screws.

Nonetheless, by Wednesday the whole cabin headliner was removed, but I still needed to grind the remaining contact cement in the v-berth. Since I was already covered in foam and with the grinder just begging to be used, I figure why not just mix some fiberglass into this equation.

Hey look everyone, you can actually make it snow inside boats!!!

Just don’t try making snow angels in this crap kids, you will be scratching for weeks.

And now onto this hole in our boat…

While grinding down the v-berth there was a quick mishap that left me thinking I put a hole in the boat. Picture this: Chad is grinding… water starts flowing into the boat… Chad tries to plug it with tape… still more water coming…. then the OH S*** factor kicks in as Chad runs down the docks to find the haul-out lift.

All only to find out I actually didn’t put a whole in the boat, but the anchor locker. The water was the remnants of the anchor locker. Somebody thought it would be smart fiberglass a shelf half way up the anchor locker, making the bottom half inaccessible where it just so happened all the water was hiding. Unbeknown to me it waited there, and when I put a hole in it “like a coconut” as one of the men in the yard said, the water lurking came pouring out. Don’t forget the fun part when I run around the yard thinking we had a sinking boat crisis on our hands… 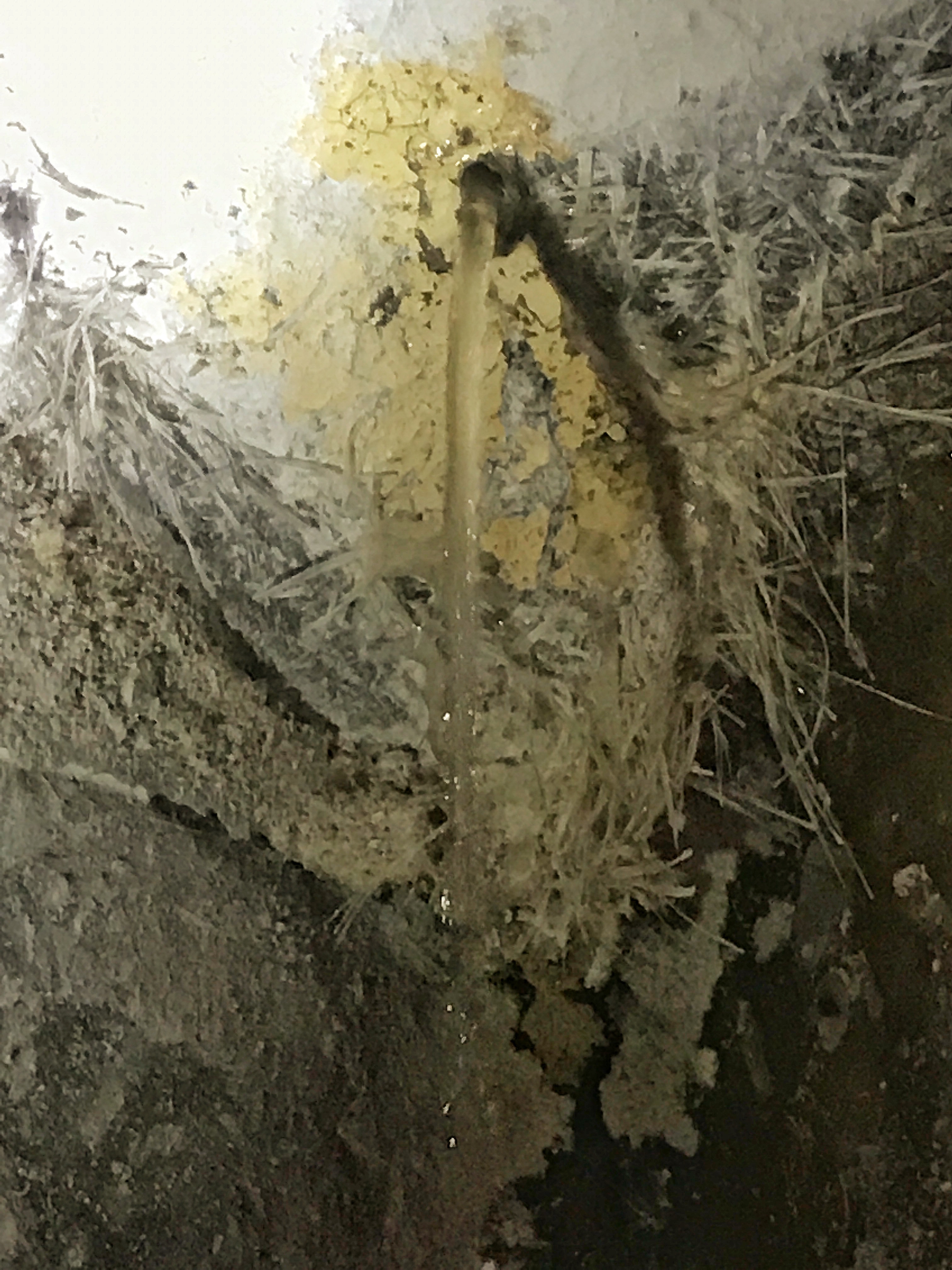 I did get around to what I initially planned on doing this week which was removing all eight port lights.

So far I am only 1 for 8, but hey gotta start somewhere!

[…] boat went through an extensive restoration before we moved aboard and not all of the projects on our list have been completed. It feels like […]

Mr. Whiting here, good read. I would have panicked at water coming in as well. I am still confused about the anchor locker. What if that hole was made somewhere else? Would it have been worse. Also don’t forget physics, if you punch a hole in the hull and can’t plug it from inside, place something (plastic patch, etc,) on the outside of the boat and water pressure will keep it in place as you are not underway. It would definetly buy you more time to save the boat and greatly reduce the amount of bailing you would have to… Read more »

Hi, I’m Abby! I was inspired to start Life Neverlands to share all I have learned in pursuit of my dream to sail the world. With a strong interest in the ocean, sailing, and youth education, I have also expanded Life Neverlands to include Neverland Ocean Learning, an ocean education series created to excite youth about the ocean that is currently in development.